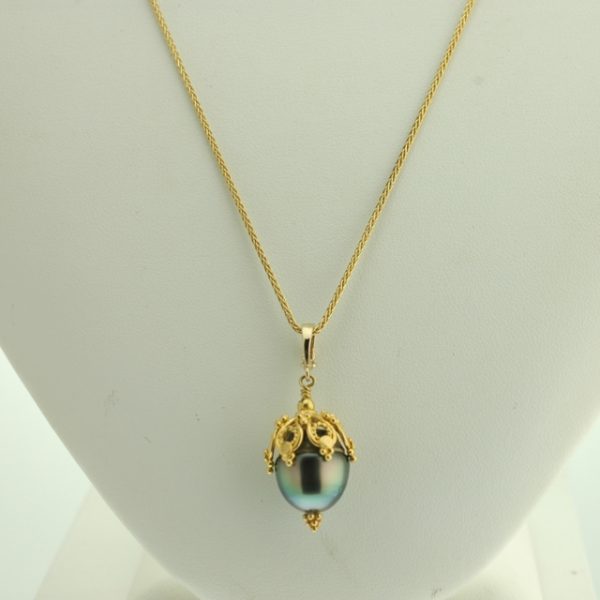 Beautiful, 18K gold Designer  pendant set with a 14mm Baroque Tahitian black pearl. More about Tahitian black pearls: A Tahitian Cultured Black Pearl is a pearl that is obtained by means of a grafting operation performed by a skilled technician on the “Pinctada Margaritifera” or “Black Lipped Oyster” of French Polynesia. “Black” Pearls are actually most often multicolored, with metallic steel gray being the most common color. The color of the pearls is entirely natural and is imparted by the oyster, which produces dark, multicolored mother-of-pearl secretions. Natural (not cultured) black pearls still occur very rarely, about one in every 10,000 oysters. It is illegal to dive for oysters for the purpose of finding a natural pearl, since the natural stocks would quickly be depleted. From the grafting to the harvesting of a black pearl, a period of 18 to 24 months is necessary to achieve the desirable thickness (1.5 mm and up) of mother-of-pearl around the nucleus. The oyster that produces the Tahitian Black Pearl can grow up to 12 inches in diameter (and weigh 10 lbs), as opposed to 3 inches for the “Akoya” oyster that produces white pearls, therefore allowing a larger nucleus to be implanted. Also, the cultivating time of a white pearl is only about 5 to 6 months. The first Black Pearls were produced in French Polynesia in the mid-60’s long before any other neighboring island. However, the Cook Islands and Kiribati now produce about 3% of the world’s supply.