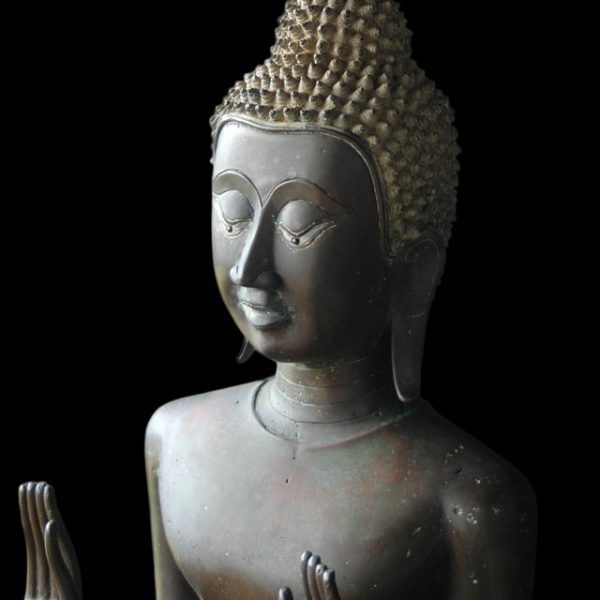 Standing with the palms facing outward in the Abhaya Mudra this gesture is used to represent protection, peace, benevolence, and the dispelling of fear. In Thailand and Laos this gesture is often associated with the walking Buddha. The Buddha is shown to subdue an attacking elephant with the Abhaya Mudra in several frescos and scripts. This mudra is associated with the removal of negative energy. With downcast eyes, elongated ears, pronounced curly hair and a striking flame finial sprouting from the Buddha’s ushnisha, we see a beautifully rendered Laotian style.
This standing Buddha reminds us of similar double abhaya mudra Buddhas from the UNESCO World Heritage City of Luang Prabang whose name means “Royal Buddha Image in the Dispelling Fear mudra.” In this sacred city one finds Wat Xieng Thong, one of the most important Lao monasteries. It is a significant monument to the spirit of religion, the grace of royalty and the traditional style of the city.

The iconography of the Buddha in Laos follows specific rules with the belief that properly rendered images are emanations of the Buddha and possess supernatural qualities. Buddha images are not intended to be naturalistic representations of Gautama Buddha as his exact features are not known. Rather, the statues represent an ideal reality. When creating a Buddha the artisan is expected to be in a spiritual mental state that will enable the envisioning of this ideal reality.

This calming piece exudes an atmosphere of tranquility. We see an almost jovial expression on the face of this stylized Buddha. May he fill your home with positivity and joy.