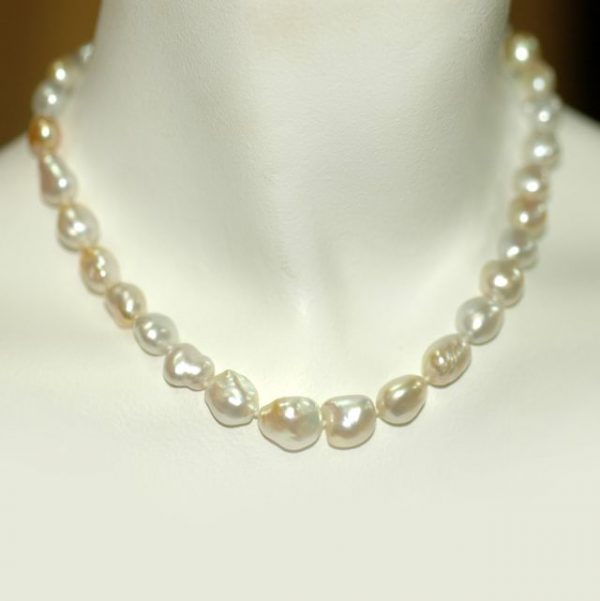 15 inches long pearl necklace made of 8-10mm Keshi pearls and natural, white and golden hued South Seas pearls ranging in size from 8 to 13mm. This beautiful necklace is finished with a 14K gold clasp.

What are Keshi pearls?
Usually, a pearl is formed when a substance such as a piece of shell becomes embedded in a mollusk such as an oyster. A type of infection ensues, and the oyster heals itself by developing a layer of nacre over the intruding substance, walling it from irritating further. Layers of nacre continue to form as long as the oyster is alive, and the result is a pearl.

However, with Keshi pearls, there are two ways that the pearl can form, none of which has to do with the “usual” process as described above. The first way that the keshi pearl can form occurs when the oyster rejects and spits out the substance – the nucleus – before the development of the pearl has had the opportunity to finish. The second possibility is that the nucleus fractures and forms two separate pearl sacs – that is, circles of nacre – neither with a nucleus. Eventually, one or two nucleus-less pearls will usually form.

Keshi pearls – also known as poppy seed pearls or seed pearls, as keshi means poppy seed in Japanese – may result from either freshwater or saltwater pearls. Keshi pearls are usually quite small in size, and as they do not have nuclei – upon which the shape of a pearl is usually determined – there is usually a large degree of variance in the shape of keshi pearls. Keshi pearls also come in a variety of different colors and shades, and are known for their luster and uncommon orient. This is a result of their composition consisting of solid nacre. As the nucleus is eventually expelled by the oyster before the pearl is actually formed, the keshi pearl consists entirely of nacre.

Though this is true, keshi pearls are not given the classification of being a natural pearl. The reason is that keshi pearls are actually a bi-product of the culturing process, and not something that happens naturally.

At one time, keshi pearls, especially of Tahiti and the South Sea, could be procured at quite the bargain; even for the most beautiful and rare samples. However, today keshi pearls are considered to be much more exceptional and infrequent. The reason for this is that both Tahitian and South Sea pearl farmers now x-ray their oysters to see whether or not the nucleus is still inside, or if it has been expelled. Should an oyster be found which has expelled its nucleus, it is re-nucleated before a keshi pearl would have the opportunity to develop. Thus the keshi pearls have become even more rare than they once were.

Still, keshi pearls remain popular as they are made of solid nacre and therefore usually have quite a bright luster. Their variable shapes are frequently considered quite desirable to jewelers who wish to design something unique and innovative.

More about South Sea pearls:
South Sea pearls are among the largest commercially harvested cultured pearls in the world. The average size of a South Sea pearl is 13 mm, with most harvests producing a range of sizes from 9 mm to 20 mm. The South Seas lie between the northern coast of Australia and the southern coast of China. These waters are the native habitat of a large oyster known as Pinctada maxima. This oyster grows up to 12 inches in diameter, and can be nucleated with a much larger bead than other saltwater oysters such as the akoya.

There are two varieties of Pinctada maxima, the silver-lipped and the gold-lipped. The two are distinguished by their distinct coloration of the outer edge of the interior. This type of shell is also known as mother-of-pearl, and is responsible for the coloration of the cultured pearls produced, therefore the name. Unlike the akoya oyster, the South Sea oyster will only accept one nucleation at a time. The oyster is nucleated when it is only about half developed, from 4.7 inches to 6.7 inches in size, or about 24 months old. Although the South Sea oyster will only handle one nucleus at a time, this oyster (like the Tahitian pearl producing Pinctada margaritifera) can be nucleated up to three times over the course of many years.

There are four reasons South Sea pearls can grow to such large sizes, dwarfing many of their other saltwater pearl counterparts. These reasons are: the large size of the Pinctada maxima, the size of the implanted bead, the length of time the pearl is left to grow in the oyster, and the oyster’s environment. Due to the size of the oyster, it is able to accept a large bead. The gonad of the Pinctada maxima is several times larger than that of the akoya. Because of this larger gonad, the South Sea oyster deposits nacre around the nucleus at a much quicker rate, especially in warm water, which speeds the oyster’s metabolism.