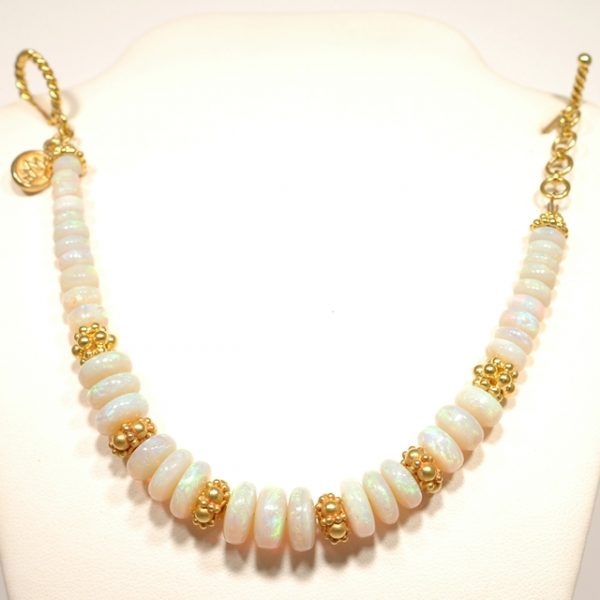 Beautiful designer bracelet made of opal beads set on a 22Kt gold chain.

More about opals:
Numerous legends and tales surround this colorful gemstone, which can be traced back in its origins to a time long before our memory, to the ancient dream time of the Australian aborigines. It is reported in their legends that the creator came down to Earth on a rainbow, in order to bring the message of peace to all the humans. And at the very spot, where his foot touched the ground, the stones became alive and started sparkling in all the colors of the rainbow. That was the birth of the Opals.

The name Opal was probably derived from Sanskrit “upala“, meaning ”valuable stone“. This was probably the root for the Greek term “opallios”, which translates as “color change”. In the days of Roman antiquity there existed a so-called “opalus”, or a “stone from several elements”. So the ancient Romans may already have had an inkling why the Opals show such a striking play of colors.

Australia is the classical Opal country and today is the worldwide most important supplier of Fine Opals. Almost 95 per cent of all Opals come from Australian mines. The remaining five per cent are mined in Mexico, and in Brazil’s north, also in the US states of Idaho and Nevada, but recently the stones have also been found in Ethiopia and in the West African country of Mali.

For ages people have been believing in the healing power of Opal. It is reported to be able to solve depressions and to help its wearer find the true and real love. Opals are supposed to further enhance the positive characteristics for people born under the zodiac sign of Cancer. Black Opal is recommended to those born under Scorpio, and Boulder Opal is the lucky stone for Aries.

The fantastic color play of Opal reflects changing emotions and moods of people. Fire and water, the sparkling images of Boulder Opal, the vivid light flashes of Black Opal or the soft shine of Milk Opal – striking contrasts characterize the colorful world of this fascinating gemstone. Maybe this is the reason why it depends on our daily mood which Opal we prefer. Opals are like human emotions: you always experience them different and anew.