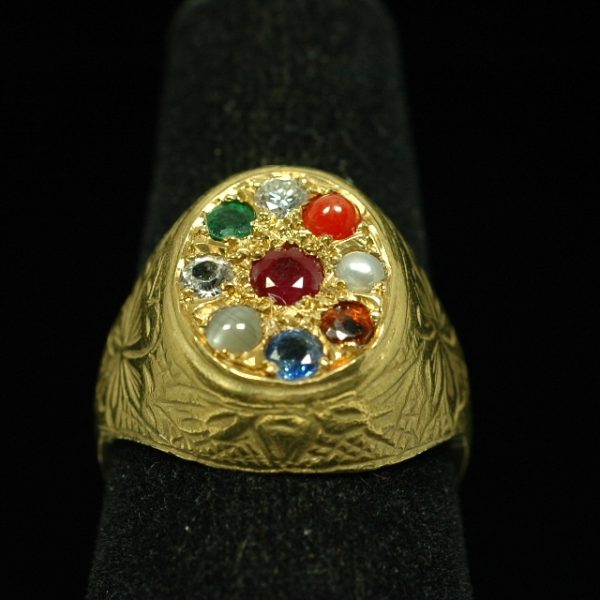 Unique 9 gem navaratna ring made of 18Kt yellow gold. This Indian astrological master-piece shows the rays of the sun shinning forth from the center ruby to other gems: cat’s eye, diamond, emerald, pearl, sapphires, red coral and hessonite garnet.

Meaning of navaratna:
Navaratna, literally a Sanskrit compound word meaning “nine gems”, is a talisman or accessory set with nine gems. It is a popular item for celebrities and tourists in India and can be found at the finest jewelry stores and lowly gift shops. Essentially Navaratna is a jeweled yantra or astrological layout consisting of nine different gems used to balance or strengthen all the 9 planets recognized by Jyotish or Sidereal Astrology. In this sense Navaratna is considered a talisman.

In Hindu astrology, life on earth is influenced by the nine planets AKA the navagrahas. All of the nine planetary positions in one’s horoscope supposedly have an influence throughout an individual’s course of life, either favorable or unfavorable. Hence, wearing these nine gems like a jeweled Navagraha yantra is said to provide an astrological balance and benefit to the wearer. It is also said that these gems potentially may have both positive or negative influences on human life, therefore planetary gems should be worn only after consulting a Vedic astrologer and also a bona fide jeweler. Similar to the beliefs held in birthstones, the benefits of wearing such accessories has not been scientifically quantified.