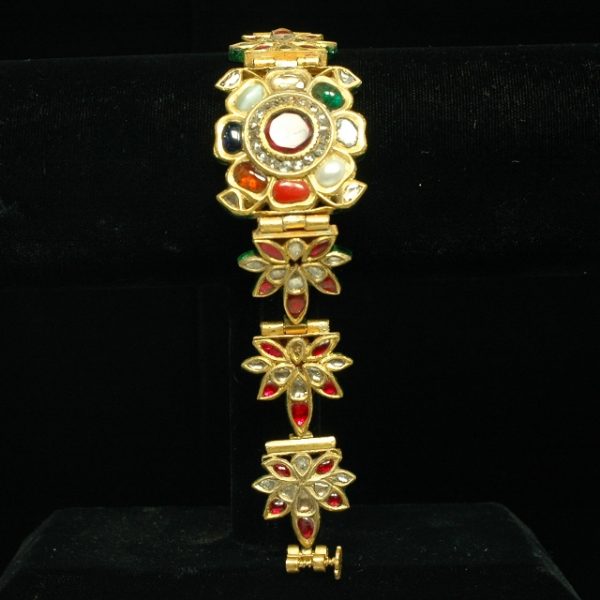 This magnificent navaratna bracelet, designed as a lotus flower in 22Kt yellow gold, is a powerful talisman worn to ward off the negative aspects of the planets on ones astrological sign.

Navaratna, literally a Sanskrit compound word meaning “nine gems”, is a talisman set with nine gems used to balance or strengthen all the nine ‘planets’ recognized by Hindu astrology. The gems are typically worn in a pendant, rather than a ring, as the stones in a ring would be too small to be considered effective. Ideally, each gem touches the skin for maximum effect.

According to Hindu astrology, life on earth is influenced by the navagrahas, or nine influencers. The placement of the navagrahas in one’s horoscope supposedly have an influence throughout an individual’s life. Wearing the nine gems is said to provide an astrological balance and benefit to the wearer. Hindu astrology also says that these gems potentially may have both positive or negative influences on human life, and that astrological gems should be worn only after consulting a Vedic astrologer. The benefits of wearing gems has not been scientifically quantified.

The nine gems associated with each navagraha:

Based on an individual’s Sidereal horoscope, either a single gem or a combination of compatible gems is advised to be worn to harness beneficial planets or counteract harmful planets.