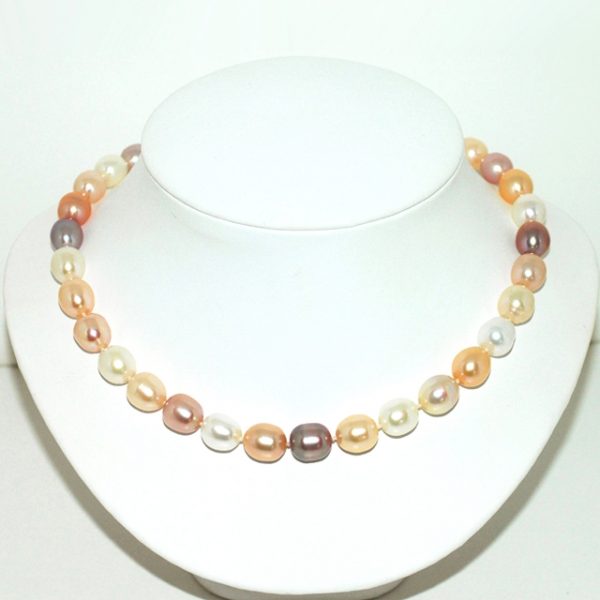 Baroque style pearl Designer necklace, made of multicolor 11.5-11mm x 11-12mm cultured Chinese freshwater pearls, set with 14Kt yellow gold clasp. About freshwater pearls: Freshwater pearls are a kind of pearl that comes from freshwater mussels. They are produced in Japan and the United States on a limited scale, but are now almost exclusive to China. The U.S. Federal Trade Commission requires that freshwater pearls be referred to as “freshwater cultured pearls” in commerce. Today China is the only commercial producer of freshwater pearls. Freshwater pearl harvests are typically bought while still in the shell. After harvest the pearls are delivered to a first-stage factory, which is responsible for cleaning and sorting the pearls by size and shape. After this process has been completed, the pearls are considered ready material for processing factories. These smaller factories perform the treatments that are nearly universal to all freshwater pearls. The pearls are pre-treated (maeshori) in a warm and cold chemical solution and then bleached. The pearls that exhibit strong coloration will only go through the maeshori. After the pearls are bleached they are drilled and then polished with a mixture of cornmeal and wax. Finally they are matched into temporary strands, which are then matched again into hanks. Hanks are composed of 5 to 10 temporary strands and are considered wholesale ready.