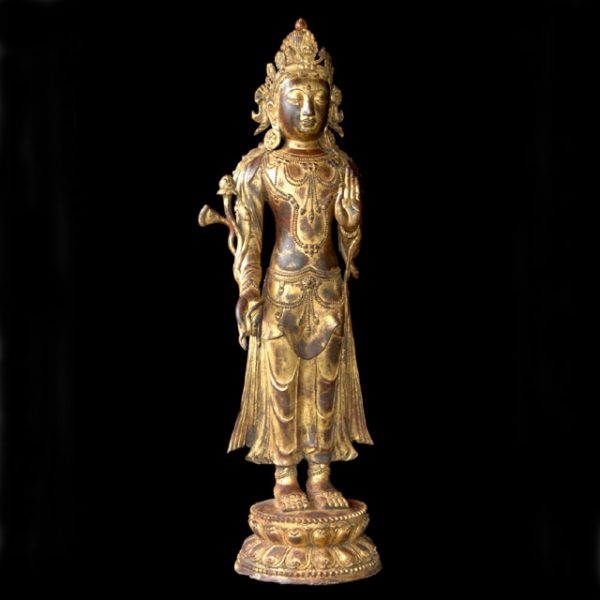 A late Ming Dynasty reproduction bronze of Padmapani made in the Ming Style of solid bronze and gold gilt.

Detailed information:
This piece is defined by its downcast, meditative eyes outlined by arched eyebrows, full lips with incised outlines and a tall chignon surmounted by a small lotus bud fronted by a diadem with floral designs. Two sets of ribbons flare out from the pendant ears which support circular earrings with a six petalled floral motif. An exquisitely beautiful countenance.
The feminine, slender body is draped in a close fitting robe flaring at the sides, the chest and hips festooned with elaborate bead necklaces. This deity can also be referred to as Padmapani meaning “Holder of the Lotus.” While we often see her depicted with a lotus flower above the left shoulder. In this stunning example, the lotus flower is entwined elegantly around the right arm. This glowing statue stands erect on a circular lotus base with left hand raised and index finger and thumb touching in a form of the Vitarka Mudra, a profound symbol of refuge, discussion, or transmission of the teachings of the Buddha.

About the Ming Dynasty:
The Ming Dynasty, also known as the Empire of the Great Ming, was the ruling dynasty of China from 1368 to 1644. This era is considered by many to have been one of the greatest eras of orderly government and social stability in human history. The people of the Ming Dynasty had a wide breadth of beliefs spanning ancestor worship, Buddhism and Taoism. The late Ming Dynasty also saw the arrival of the first Jesuit missionaries as well as Dominican and Franciscan clergy from Europe. These Western eyes have left us some fascinating stories of the art of the time. They reveal the existence of our professional counterparts, that is, connoisseurs and collectors of refined artistic taste with large Buddhist art collections. The Ming Dynasty saw a steady flourishing of the sacred arts in China. This elegant Sino-Tibetan Buddhist statue of Kuan Yin appears to represent a form of Lokitesvara or Tara, symbolizing the feminine energy of the compassionate Avalokitesvara.

Grace your home with this exquisite manifestation of the divine feminine, the eternal bodhisattva who embodies the compassion of all Buddhas. Imbibe from the wellspring of Kuan Yin as you contemplate the divine lotus and all things good, beautiful, and true.