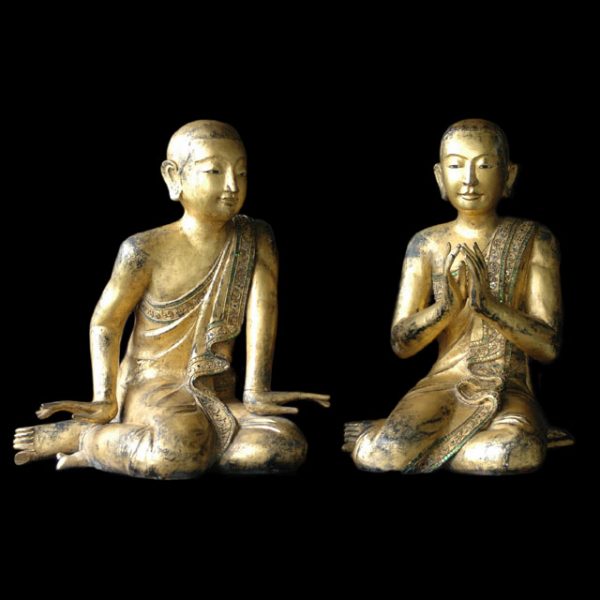 With exquisite workmanship, these two figures exude a serene, peaceful posture of meditation and calm as they listen in bliss at the foot of the Buddha. Moggallana is described as the most accomplished disciple in the supernatural powers achievable through meditation. The monk robes are elegantly carved with outstanding realism as are the musculature of the arms and the positions of the hands and feet. One figure shows hands together in adoration and awe while the other rests his hands on his knee and ankle in entranced rapture.

At the end of the 18th Century a new style of Buddha images emerged in Burma. Centered around the city of Mandalay which was considered the heart of Burma’s Buddhist art, thanks to the patronage of King Mandon, a devout Buddhist himself. Seated at the foot of the Buddha in adoration, these exquisite hand carved disciples meditate on the words of the Buddha. The Mandalay Period was one of great realism in the figures of the Buddha and his followers. These two statutes most likely represent the Buddha’s favorite and chief disciples or apostles, Sariputta and Moggallana. Sariputta became an Arahat, or spiritual practitioner of the highest stages of attainment, depicted in Theravada Buddhism as the “foremost in wisdom.”

All paths lead to me…let these serene spiritual practitioners share their spiritual attainment with you through the example of their elegant adoration.