Cart …
View cart “Silver Dorje Sambha” has been added to your cart. 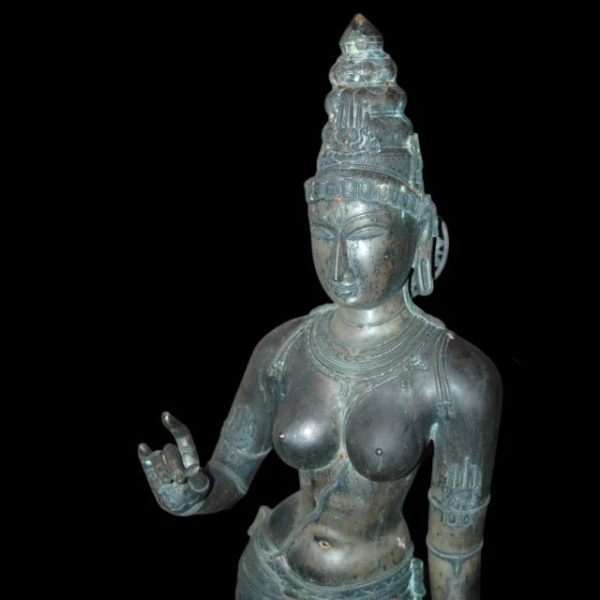 The Shivite people are devout followers of Parvati’s paramour, Shiva. Standing at 5 feet tall, this goddess was solid cast in one piece. This late bronze incorporates the fluid Chola style with later Vijayanagara Period style hair ornamentation. This early 20th Century rendering of Parvati shows beautiful details in the hands with clearly outlined fingernails. The hands and fingers are cast larger than in true Chola Period originals and is another indication that this piece is much more contemporary and has felt the influence of more modern styles. Her rings and bracelets are beautifully cast, as are the details of her garments. She is adorned with rich necklaces and her hair is in the classical conical style of Chola.

Chola Period bronzes were cast using the lost-wax technique. Each bronze would have had an individual wax model making no two statues identical. That said, there are very clear iconographic conventions that are followed which include her tall conical crown with mountain-like tiers known as the karandamukuta and her Vanki arm band. Additionally her stance is known as the tri-bent pose or Tribhanga. In this pose the body is oppositely bent at the knees, waist and neck with the result being the formation of a gentle “S” shape. This is considered the most graceful and sensual position of the classical Indian dance form, Odissi. Her left arm is held down following the lines of her posture while the right hand is poised to hold a flower. This gesture can also be one of submission to her partner, Shiva, who would often be found accompanying her in his form as Lord of the Dance or Nataraja.

The ushnisha on this Parvati is reminiscent of the later Vajayanagara style with defined, layered hair. At the back of the head one sees a disc known as the Sirachakra. The placement of this disc identifies her as a goddess. The strands of hair coming down her neck to her mid-shoulder region are also typical of the Chola Period style.
The Vanki armbands and waist ornamentation are typically Chola. Her diaphanous skirt held with heavy belt emphasizes her sensuality. Parvati’s realistic details result in a sensual, fluid form that appears to be on the verge of motion…perhaps just about to begin a dance with her beloved.

More on the Chola Dynasty:
The Chola Dynasty was a Tamil Dynasty in Southern India which ruled from the 3rd Century BC to the 13th Century AD. Under the Cholas, the Tamil country reached new heights of excellence in art, religion and literature. Monumental architecture in the form of majestic temples and sculptures in stone and bronze reached a finesse never before achieved in India. Many of the surviving examples of Hindu cultural influence found today throughout Southeast Asia owe much to the legacy of the Cholas. This masterful reproduction of a Chola Style Parvati was cast nearly 100 years ago in the famous Shivite village of Swamimali in Tamil Nadu, Southern India.

Welcome this life size manifestation of the divine feminine into your home and have a constant gentle reminder of elegance, fluid motion, and the rich details of a distant past. This stunning, consecrated piece will bring serenity and balance to your abode as she joins you in the dance of life!