Cart …
View cart “Navarathna ring” has been added to your cart. 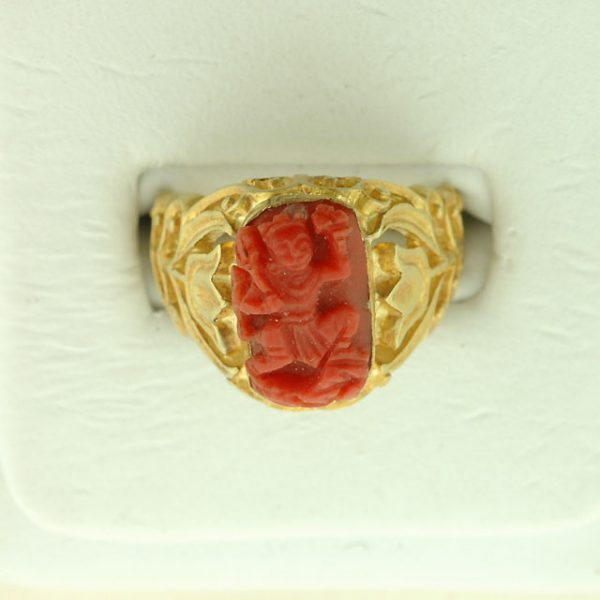 An 18K coral ring featuring an Hand carved image of Hanuman, from our designer collection. More on Hanuman: Hanuman, a great devotee of Lord Rama, is particularly associated with the Ramayana, the story of Rama and Sita. In the story, Sita, Rama’s wife, is kidnapped by the evil King, ten-headed demon Ravana who carries her off to his fortress in the island of Lanka. At great risk to his own safety, Hanuman finds Sita and then returns to help Rama build a bridge towards the island to rescue Sita. During the ensuing battle, Rama’s brother Lakshmana was fatally wounded. Hanuman was sent to fetch healing herbs which grew on a particular mountain. Unable to identify the herbs, he uprooted the whole mountain and brought it back to the site of the battle thus saving Lakshmana’s life. Images of Hanuman often show him holding the mountain in his hand. As a model for human devotion to God, he is often depicted with paws clasped together in reverence. He is a symbol of strength and loyalty and represents the concept that animals are also a creation of God. Hanuman is also regarded as a god in his own right and as the son of the wind god (Vayu) he is able to fly and change shape at will. He is one of the few gods without a consort. He is also called Mahaveera (the great hero) or Pavanputra (son of air) or Bajarangbali. This deity is a provider of courage, hope, knowledge, intellect and devotion. He is pictured as a robust monkey holding a mace (gada) which is a sign of bravery and having a picture of Lord Rama tattooed on his chest which is a sign of his devotion to Lord Rama. Source: Ritual Objects & Deities – Mukhiya N. Lama