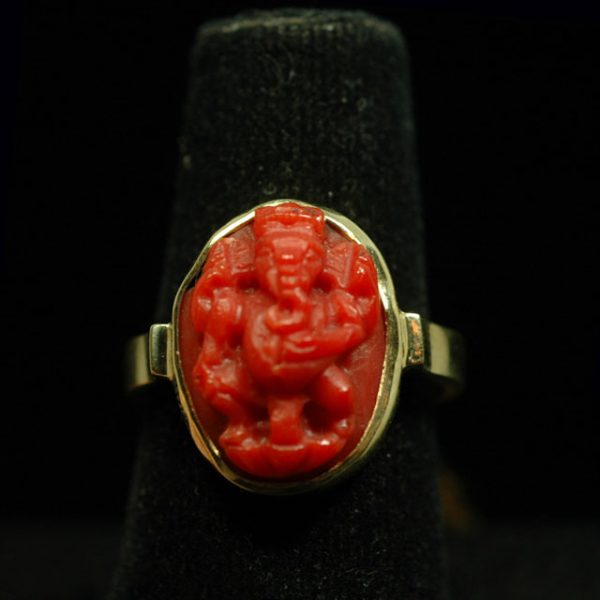 More about Ganesha:
Ganesha, also spelled Ganesa or Ganesh and also known as Ganapati, Vinayaka, and Pillaiyar, is one of the best-known and most widely worshipped deities in the Hindu pantheon. His image is found throughout India. Hindu sects worship him regardless of affiliations. Devotion to Ganesha is widely diffused and extends to Jains, Buddhists, and beyond India.

Although he is known by many other attributes, Ganesha’s elephant head makes him easy to identify. Ganesha is widely revered as the Remover of Obstacles and more generally as Lord of Beginnings and Lord of Obstacles (Vighnesha, Vighneshvara), patron of arts and sciences, and the deva of intellect and wisdom. He is honored at the start of rituals and ceremonies and invoked as Patron of Letters during writing sessions. Several texts relate mythological anecdotes associated with his birth and exploits and explain his distinct iconography.

Astrological effects of coral:
Red coral is ruled by Mars. Coral can be worn by those for whom Mars is lord of an auspicious house in the birth chart. If Mars is the lord of an inauspicious house, it may be harmful to wear red coral. A red coral stone or necklace can be worn to strengthen Mars. The darker the coral, the more powerful the effect.

The auspicious qualities of coral: a good red color, a beautiful appearance, freedom from cracks and holes, a perfectly round or oval shape, a smooth surface, a nice sheen, and a regular shape.

Coral’s possible flaws: cracks, bores in the body, more than one color in the same piece, black or white spots, depressions, a twisted or bent body.A flawless, well-polished, brightly dark red-colored piece of coral will have the best result. Such a piece will increase wealth and remove danger and obstacles.

Those who wear red coral will be brave and defeat their enemies. Red coral helps defeat mental depression, and it protects women from widowhood. Red coral protects the wearer from evil spirits and curses, and stops nightmares. It aids meditation and brings happiness. Red coral can help one avoid violence and war.

Coral turns inactive persons into active ones, helps build finances, increases determination, courage, physical strength, vitality, and leadership qualities, and helps one to finish the tasks he has begun. It can help one get a daughter married or to find a new job. It can help marital life. It can also help increase sexual desire, especially in men.