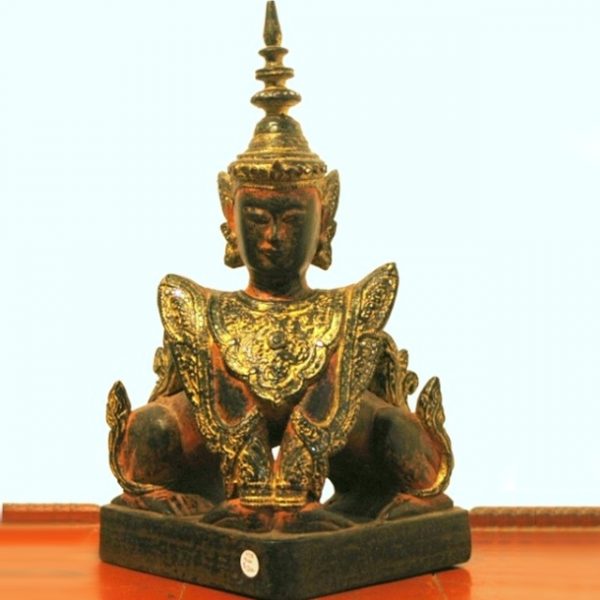 A figure of a Burmese sphinx, temple guardian.

20th century figure of Manouthiha, the Burmese Sphinx. It is a temple corner protector made of wood with the gold gilt, set with colored glass.

Where’s Burma?:
Burma, officially the Union of Myanmar, is the largest country by geographical area in mainland Southeast Asia, or Indochina. The country is bordered by the People’s Republic of China on the northeast, Laos on the east, Thailand on the southeast, Bangladesh on the west, India on the northwest, and the Bay of Bengal to the southwest with the Andaman Sea defining its southern periphery. One-third of Burma’s total perimeter, 1,930 kilometres (1,199 mi), forms an uninterrupted coastline.

The country’s culture, heavily influenced by neighbours, is based on Theravada Buddhism intertwined with local elements. Burma’s diverse population has played a major role in defining its politics, history and demographics in modern times, and the country continues to struggle to mend its ethnic tensions.

What’s a sphinx?
A sphinx is a zoomorphic mythological figure which is depicted as a recumbent lion with a human head. It has its origins in sculpted figures of Old Kingdom Egypt, to which the ancient Greeks applied their own name for a female monster, the “strangler”, an archaic figure of Greek mythology. Similar creatures appear throughout South and South-East Asia.