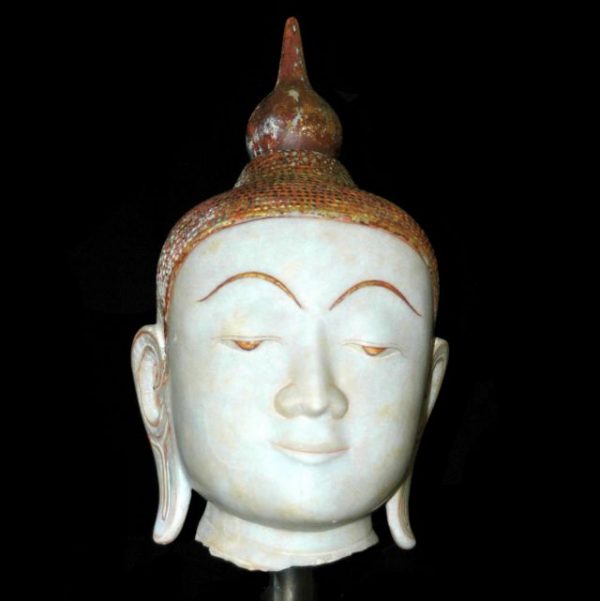 A beautiful 19th Century Burmese Shan Culture Buddha Head. This sculpture has two pieces. The first is the solid marble carving of the head while the second is the extension of the ushnisha, the three dimensional oval at the top of the head of the Buddha. This removable sphere with flared tip, points to the heavens and can be likened to a flame of enlightenment.

As with other Shan pieces, we see beautiful, expressive rounded eyebrows with down turned eyes and the hint of a smile. Compared with Mandalay counterparts, we see a much smaller rim between forehead and hair. This larger than life Buddha head came from a full Standing Buddha. Unfortunately the rest of this piece has been lost to time.

The Shan People are a Tai ethnic group in Southeast Asia with communities in Burma and China. Living primarily in the Shan State of Burma, the majority of Shan are Theravada Buddhists. They constitute one of the four main Buddhist ethnic groups in Burma. In sacred art, Shan Style is synonymous with Tai Yai and shows the Buddha with a wide forehead and thick temples, faces are oval with pointed chins and eyebrows have a pronounced curve. Eyes are typically downcast in the Bhavana state of meditation. This stately 19th Century Buddha head has a deeply pensive expression of sincere meditation.

May this stately masterpiece of Shan carving bring the grace and Buddha presence into your home or workplace.