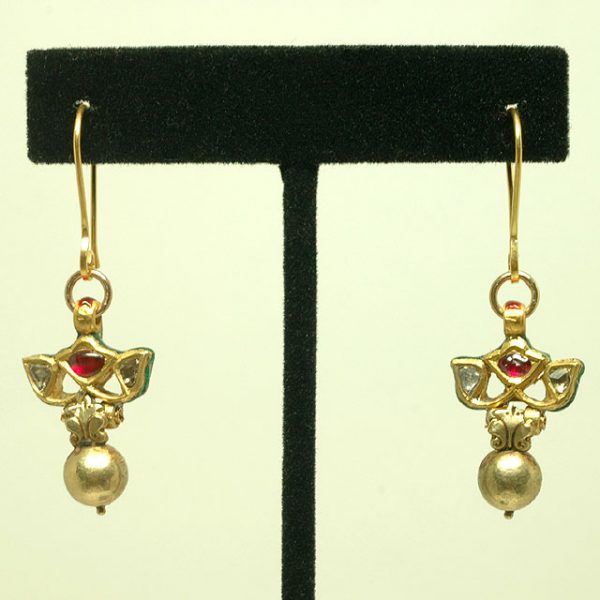 A pair of antique 18K & 22K yellow gold earrings, enameled, with kundan set diamonds and rubies. An exquisite addition to our Empress Collection.

More about kundan jewelry:
It flourished in greatly in the Mughal era as it received royal patronage with the most intricate form of Indian Gem Stone, and is the oldest form of jewelry made and worn in India, still in use. Over the years the kundan jewelry of the courts was successfully copied in silver in Rajasthan, Bihar and the Punjab states and became popular with common man as well.
Even today, it remains an integral part of traditional wedding trousseau for a bride, especially as traditional settings such as kundan, thappa and ras rawa are experiencing a revival.

The word Kundan means highly refined gold, the kundan jewelry uses excessively refined purest form of molten gold to set stones etc.
Kundan Jewelry is created by setting carefully shaped, cut and polished multicoloured gemstones into exquisitely designed pure gold or faux metal base. The elaborate process, begins with first skeletal framework called Ghaat, thereafter the Paadh procedure takes place, during which lac or the wax is poured onto the framework and moulded according to the design. In the following Khudai process, fitting of stones or the uncut gems is done into the framework, followed by Meenakari, which involves enameling to define the design details. In the next, Pakai process, gold foils that hold the gems onto the framework are soldered and finally the gems are polished using Chillai process.