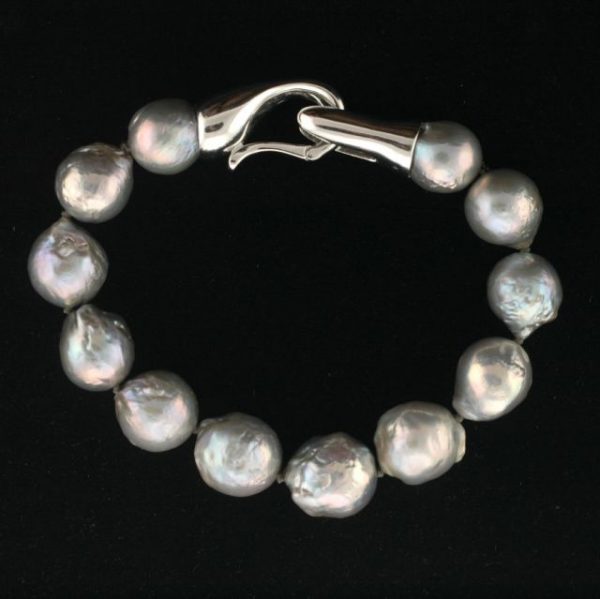 12-15mm Baroque Freshwater Pearl Bracelet set in sterling silver. A new addition to the Freshwater Pearl and Silver Jewelry Collections at Jewel of the Lotus and the Lotus Gallery. Where do freshwater pearls come from? Although the traditional source of pearls has been saltwater mollusks, freshwater mussels, which live in ponds, lakes and rivers, can also produce pearls. China has harvested freshwater pearls in the form of mabe since the 13th century, and has now become the world’s undisputed leader in freshwater pearl production. The first record mentioning pearls in China was from 2206 BC. The United States was also a major source of natural freshwater pearls, from the discovery of the New World, through the 19th century, until over-harvesting and increasing pollution significantly reduced the number of available pearl-forming mussels in the US. The appeal of freshwater pearls Generally speaking, freshwater pearls are not as round as saltwater pearls, and they do not have the same sharp luster and shine as akoya pearls. However, they appear in a wide variety of shapes and natural colors, and they tend to be less expensive than saltwater pearls, making them very popular with younger people and designers. Also, because freshwater pearls are solid nacre, they are also quite durable, resisting chipping, wear, and degeneration. What Makes Freshwater Pearls Different? Freshwater pearls differ from other cultured pearls, in that the great majority of them are not bead-nucleated. Freshwater mollusks are nucleated by creating a small incision in the fleshy mantle tissue of a 6 to 12 month old mussel, then inserting a 3mm square piece of mantle tissue from a donor mussel. Upon insertion, the donor, (graft) tissue is twisted slightly, rounding out the edges. What happens after this point is really just speculation. Some believe that this tissue acts as a catalyst in producing a pearl sac thus making the ‘nucleation’ actual ‘activation’. Others believe the tissue molds with the host to create a pearl sac, while still others maintain the tissue is the actual nucleus. Although it is said that a freshwater mollusk can withstand up to 25 insertions per valve, it is common industry practice to perform only 12-16 insertions in either valve, for a total production of 24-32 pearls. The mollusks are then returned to their freshwater environment where they are tended for 2-6 years. The resulting pearls are of solid nacre, but without a bead nucleus to guide the growth process the pearls are rarely perfectly round. Source: www.pearl-guide.com