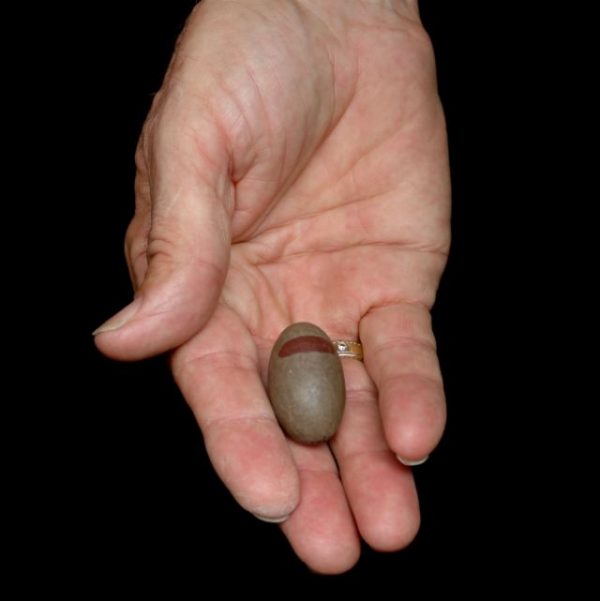 Price shown is for 1 lingam only. When ordering please indicate the lingam of your choice by referring to the picture above.

More about Shiva lingam stones:
The Lingam is one of the oldest religious symbols of civilization. It was recognized as far back as the ancient Indus valley civilization for its healing power. This power came to be associated with one of the three main Hindu deities, lord Shiva. Over thousands of years the Tantric Lingam has come to represent more than a physical or material form to be worshipped as an idol by the learned sages of the East and the West. To them the lingam represents a form of energy, which is within each of us. We are all made of part male and part female energy. Too much of one or the other is destructive, causing imbalance. Male and female energies must be unified if we are to find real peace of mind. Through the union of opposites the energies of creation are released and we can realize a state of higher consciousness.

The great Rishis of ancient India introduced the Tantric philosophy to bring a more harmonious balance in the dualistic world to which we are born. The Tantric believes that all souls are unique emanations of God, just as God is everywhere and in everything. By concentrating our consciousness on an external object we can realize that God consciousness within (enlightenment). The object should be as natural as a stone, round as the cycle of rebirth, and as smooth as the sea of meditation. Through the senses of sight, touch, and feeling one may calm the spirit and stop the internal dialogue for meditation. God is a state of consciousness, not a human form or statue.

The Tantric looks on the natural forms of nature to meditate. In the Tantric lingam he finds all his requirements. The Tantric Lingam is a naturally formed stone born of this earth. Within the lingam are two kinds of minerals fused together under great pressure, representing not only the duality of man and woman, but also a world of constant change, as no two lingams are alike. The vertical or phallic shape of the lingam represents the stream of man’s expanding consciousness and evolution upward. The horizontal or red female lips of the lingam represent the contracting stream of female consciousness and evolution inward. The lingam is solid and heavier than most stones, representing the life of those who live according to their faith. These are but a few of the hidden meanings of the lingam or Cosmic Egg.

According to Tantric symbolism, the ideal form of the Tantric Lingam is concentric shaped, oval, smooth and gray colored with a red matrix. Not all lingams are Tantric. The true Tantric Lingam which the Hindus believe fell out of heaven from the gods, actually comes from the Narmada River in the central region of India. This place is known today as Onkar Mandhata, one of the seven holy pilgrimage sites of India.

The Tantric Lingam is a naturally tumbled and pre-shaped by the river. The process of finding the lingams and shaping them into the beautiful concentric marble-like finished stone is a long one. Once a year, during the dry season when the river is low, particularly on the full moon in February or Sivaratri, the lingams are ceremoniously gathered from the muddy banks of the Narmada River. However, it is not as easy as picking up pebbles on the beach. Each stone must be washed and inspected. Very few stones have the special red marking or spots that make the Tantric Lingam so unique. The lingams are not perfectly concentric and must be shaped and hand polished before they are acceptable for Temple use. This process takes hours of manual labor and special skills to get a perfectly concentric, oval, smooth lingam.

The Tantric Lingam is found only in this one place in India. It can be identified gemologically by its unique red spots. These spots do not run all the way through the stone like normal strata stone. In this case the mineral known as crypto crystalline quartz, or gemologically as chalcedony has an inclusion or a matrix of Iron Oxide and Geothite. This matrix crystallized after the formation of the Chalcedony. To the Tantric, this suggests a form of energy coming from inside the stone, i.e. creation. The body of the stone thus represents male energy (knowledge) and the red spots represent female energy (wisdom). The very essence of creation is symbolized by the Tantric Lingam in that in the beginning there was one energy, call it God of anything you like. That energy lay dormant until a second energy was introduced. When that occurred all things in this universe were created, Bing Bang. The egg shape adds to the idea of the Cosmic Egg out of which the dualistic universe was hatched. Also the oval outline represents the continuous unending motion of the universe as it expands and contracts forever but never ends.

Traditionally, the lingam is stood upright with the matrix marking at the upper end, a third of the way from the top. Ideally this should be the only marking in a level horizontal plane. With this red matrix or female symbol are three distinct lines, the outer enclosing the marking in an unbroken continuous oval line, the inner separating the red iron Oxide from the yellow Geothite center, and a thin straight line or actual crack at the center physically representing the female energy coming out of the stone. Such a perfect Tantric Lingam with no other marking is very rare and valuable. Most Tantric Lingams have several markings, each of which represents the female energy coming out of the stone. This can also be interpreted as representation of the seven chakras depending on where the marking is found in relationship to the alignment of our own chakras. Each marking is very different and the Tantric Lingam reveals to each of us something different. For some it may be a calligraphic inscription, for others it may be an animal or bird.

A final mention should be made about one other very rarer powerful marking, the Brahman’s cord. In India, the Brahmans are a priestly caste distinguished by the cotton cord they always wear over their shoulder or to their side. Some Tantric Lingams have such a cord as represented by a quartz inclusion running in a very thin line all the way around the lingam.

Today the lingam may be found in several forms and materials in the East. The most common is the Siva lingam set into a Yoni. The Yoni is carved out of the stone, usually the same material as the lingam and has the dual purpose as the female symbol (key hole shape) and as a through for the offerings, which are ritually poured over the lingam for puja or worship. There is a spout on one end which allows the liquids to drain into a receptacle. This form of lingam/Yoni may be found in most Saivite Temples. For the most part these lingams are not Tantric, but manmade from some local material and need to the Yoni to be Tantric. Only the Tantric Lingam is tantric in itself and does not need a Yoni to sit in, so the Yoni would serve only as a practical function for puja. One may find many of these type of manmade lingams with the four faces or emanations of Shiva carved on them.

In the West, the lingam has taken on several new powerful meanings and uses beyond the traditional Eastern ones. What really makes the stone magical is its crystalline form. Being made up of thousands of tiny quartz crystals, the Tantric Lingam has a powerful resonation or vibration similar to quartz crystals used in watches and electronic equipment. The Tantric Lingam resonates with your body chakra centers. It helps to realign and balance them. It also works as a very grounding and centering tool. Just like a crystal, the Tantric Lingam should be washed and cleared of all energy. This can be done by running water over it in a river or sink for at least 20 minutes. Once it is clear, you may hold it, putting your energy into it. The more you work with it the more powerful it will become and the more strength you will be able to pull from it when you need. If any other energy touches it all you have to do is wash it again holding on to it this time and your energy will be saved. This works particularly well with the small-sized lingam. This method may also be used to release stress by putting into the lingam and washing it away.

The importance of the lingam is not how old it is but where it was worshipped. To some it only has a material value as a form of natural art or antique. But to the Tantric, the lingam’s true value is a mystic one as an object of power. For them the Tantric Lingam has a certain vibration. Through meditation one may become attuned to this vibration, using the lingam as a source of power. One must believe in the divine presence in all things. Then one must pick up an object, such as the lingam, with its smooth, round form that represent their feelings and beliefs, in a form of meditation. The energies one puts into the lingam will be stored and returned to them when they need it. The lingam is an object of power, the power which is dormant within each of us.

“In the beginning this reality was non-existent, it grew, it turned into an egg. The egg lay for the time of a year. The egg broke open. The two halves were one of silver, one of gold. The silver one became the earth, the golden one the sky, and the thick membrane, the mist, with the clouds, the small veins, the rivers and the fluid sea. And (from it) all things arose and all things they desired.”

“He who worships the linga knowing it to be the ‘First Cause’, the source of consciousness, the substance to the Universe, is nearer to me (Shiva) than any other being.”