Jewel of the Lotus

Jewel of the Lotus (JOL) was established in 1975 by Tsajon von Lixfeld, Gemologist and curator of Asian art. It represents years of research and trading in the Far East, India, Nepal, Tibet, Burma, and Thailand. JOL purveys not only fine Asian antiques and renditions, but magnificent jewelry, traditional and designer. Fine quality hand crafted workmanship is the prerequisite for JOL. The owners, Tsajon and his wife, Kamalia, personally select and vet all merchandise, certifying all antiques and jewelry.

Most of our merchandise is available on line. Private showings are available by appointment only on Kauai. We are enthusiastic about your interest in our products and hope these creative works of art inspire you to make an order or contact us for more information. 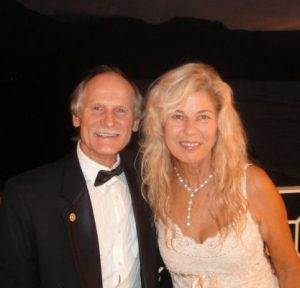 Tsajon came to the USA in 1952 and became a citizen in 1956. He graduated from Stony Brook Prep School in 1963 and went on to the University of Denver. In 1968 he moved to Los Angeles and worked for Western Airlines at LAX for two years. He started his own import business “ Ergo Imports” in 1970 and has owned his own business since. In 1972 he moved to Amsterdam and established his import business in Europe traveling the overland route to India for the winters and selling at the flea markets in Europe in the summer. Between 1970 and 1979 Tsajon made five overland trips to India via Turkey, Iran, Afghanistan, and Pakistan. He established many contacts alone the way particularly in India and Nepal. His interest was not only in trade but he learned to speak Hindi and some Tibetan as well. He followed the cultural heritage and took refuge with HH Karmapa Lama in 1974, then spent six months in the Dali Monastery in Darjeerling, India. The business name “Jewel of the Lotus” was inspired by his teacher Kyabje Thuksey Rinpoche who instructed him to live his Dharma and use the business as a way to spread the Dharma to the glory and recognition of the Buddha.

One of the first Asian Artifacts Tsajon imported from India in the 70’s was the Tantric Lingam. He was given a Tantric Lingam by a Hindu Sadhu in Banaras, India and told to spread the Shiva energy of the Stone around the world. He became intrigued with the Stone and spent six months researching its meaning and origin. Over the years Tsajon sold over 10,000 lingams in Europe and the US.

In 1982 Tsajon moved back to the USA. He was offered a scholarship to go to the Gemological Institute of America where he received a degree in Gemology and jewelry manufacturing. This training gave him the refined eye to see and grade Diamonds but also fine art such as Tibetan bronzes and Thangkas. He then went ahead and became an appraiser of Asian Art. Tsajon spent 18 years exhibiting at the Tucson Gem and Mineral Show in the Wholesale Jewelry Trade. He also exhibited in the Caskey Lees Arts of Pacific Asia Antique Shows in Los Angeles, San Francisco, and New York.

In 1998 Tsajon curated an exhibition of Antique India Gold Jewelry entitled Aristocratic Adornments of India. It featured a 175ct. Mughal Ruby inscribed by Emperor Jahangir and given to his son Shah Jahan. Other museums Tsajon has sold to are the Dallas Museum and Los Angeles County Museum.

In 1992 Tsajon was married to Kamalia and they moved to Kauai, Hawaii, where in 1999 they opened the Lotus Gallery, which is the sum of all their years in the trade. Tsajon now spends his time designing and making jewelry in his Studio at home when he isn’t off to Asia hunting treasures. Over the years he has managed to keep some of the fabulous Asian antiques that he bought and has a world class collection of small Indian and Nepalese Bronzes. In Oct 2017 the Gemological Institute of America opened an exhibition “Centuries of Opulence, JEWELS OF INDIA” the finest collection of antique Indian gold Jewelry in the USA introduced and curated by Tsajon von Lixfeld GIA graduate and Indian Historian.

Today Tsajon and Kamalia have closed the Lotus Galleries on Kauai and offer their creative works on line and by appointment only.